I was looking for a slightly different walk this weekend and decided to do these three Munros in Perthshire. From what I have read they are normally tackled from Inveray vie Glen Ey but I could see a route starting from Spittal of Glenshee which would save me 40 miles of driving and not add any additional distance to the walk/bike ride. So the plan was hatched and I set off up to Spittal of Glenshee early on Saturday morning arriving there at 0640 approximately. There is free parking at the hotel 100m in from the main road. I believe that you can also park at the Dalmunzie hotel which is 2.3km further into the valley for a parking fee of £2 and then start your bike ride from their

I ride along the road, over the bridge and turn left onto the land rover track. There are four gates in succession within the first couple of kilometres of track which have to be opened and closed. There are also plenty of sheep about and lots of lambs. The path up the valley is excellent although a bit bumpy with rocks at times and it is quite flat. I am in no hurry though. I haven’t been on the bike since November and I want to conserve my energy for the walk however my legs do feel tired already. After the first gate I realize that I have left my walking poles in the car but I am not going back now so I will have to do without. This valley, Gleann Taitneach, is wonderfull. Its peaceful, with lovely sloping hills to the left, right and in front and a number of burns running down into the main river Allt Ghlinn Thaitneich. The sun was already shining at 0700 hrs and this place I was in was picture postcard. I cycle for approximately 6.7km just before the path starts to rise and park the bike in the grass.

I now cross the river and head directly up the pathless slope opposite gaining height as I went. After about 15 mins at about 600m I find a land rover track. It’s not well used but its definitely there which makes the going easier. I walk up this track for another 130m of ascent then leave it to ascend the ridge of Sron na Siobhiaidh and follow the ridge round to reach the summit of Glas Tulaichean.

The weather is incredibly hot. Its also clear and I can clearly see Carn a Righ across the valley. I can also see the clear path around the flank of Mam nan Carn in the distance below me. I now  head directly northwest descending the steep slope and crossing the boggy valley before climbing up to the path previously mentioned. I will have to come back to this point to go to the third Munro so its an option to leave packs and travel light but I didn’t bother. Its now 1km to the summit and I quickly follow the path all the way to the top. I meet two other guys up there. They have come in from Glen Ey and wild camped last night.

I now retrace my steps back down the track to where the bags could have been left and now follow the path around the north west flank of Mam nan Carn. This traverses the hillside ascending as it goes and then the path disappears but I simply make a beeline for the Beallach below Ben Iutharn Mhor. It’s now a straight forward 1km and 150m rise to the summit of this Munro.

I am thinking that maybe I could attempt the other two Munros, Carn Bhac and An Socach so I follow the ridge east then north to the cairn and then look down into the valley. I go down 50 metres or so but it looks very steep and I can see a snow line below me which I would rather not cross. So I continue East looking for a suitable spot to descend but decide the distance is too great for one day on this occasion. I will do the final two munros from Glen Ey at a later date.

So I head back up to Ben Iutharn Mhor for the second time where I meet the campers. They have also decided that due to the snow in the valley they will not be doing Carn Bhac today and will walk out. I now have to find a way back to the bike, but it’s easy enough. It’s just a matter of crossing the eastern flank of Mam Nan Carn, dropping down to Loch Nan Eun and following the track back down the valley to the bike. It’s beautiful at the loch. Perfect peace and tranquility. There is a tent pitched near the natural jetty and as I walk out I meet a number of people walking in. What a beautiful day. Unfortunately it really was a bit warm for walking. 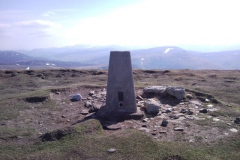